President Trump’s success in the US election and the UK’s decision to leave the European Union prompted a dip in economic confidence across the globe, although news from the emerging world was more encouraging.

Global confidence dipped in the fourth quarter as political and economic risks rose. Declining incomes are companies’ main concern, with 44% citing this as a worry. The regions that cite declining incomes as their biggest concern are the Middle East, Africa and Latin America – all parts of the global economy that have either been in recession or have seen growth slow to multi-year lows.

The decline in global confidence has been matched by a fall in hiring, with 52% of respondents saying they are considering staff cuts or a staff freeze, compared with 16% who are planning to create new jobs.

Similarly, there were more companies planning to scale back investment in capital projects (38%) than increase investment (14%). 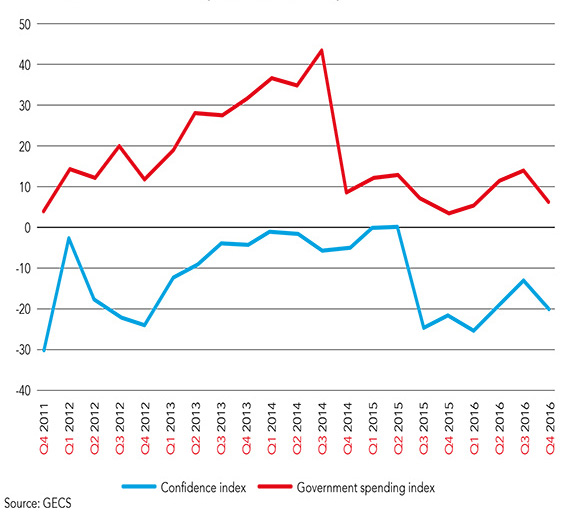 Confidence and government spending index graph, showing a fall in both in Q4, 2016.

43% of survey respondents said they had become less confident over the previous three months; just 23% had become more confident. Exchange rate volatility is also high on the list of concerns – hardly a surprise, given the steady appreciation of the US dollar.

Since his election, Donald Trump has confirmed that the US will not ratify the Trans-Pacific Partnership (TPP – a 12-country free trade agreement). The demise of the TPP has potentially significant implications for the US’ influence throughout the region, and China could play a more assertive role.

A China-backed free-trade agreement called the Regional Comprehensive Economic Partnership (RCEP – a free-trade deal for Asia that excludes the US) now has renewed impetus.

President Trump’s campaign rhetoric included pulling out of North American Free Trade Agreement (NAFTA), withdrawing from the WTO and levying big tariffs on China. Following through on such policies could have significant repercussions for the US economy.

"A key reason for the drop in global confidence in Q4 could be the reported fall in the government spending index. It fell to its lowest level since the start of 2016, a reflection that major developed markets remain firmly in austerity mode. "

4,551 ACCA and IMA members around the world responded including more than 350 CFOs.